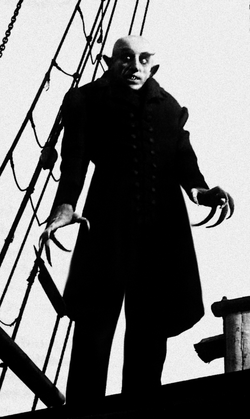 "Your wife has a lovely neck."
―Orlok to Hutter, referencing his wife Ellen.

He is portrayed by Max Schreck.

Not much is known about his past, Orlok resides alone in a vast and deteriorating castle, hidden among the rugged peaks in a lost corner of the Carpathian Mountains.

Nosferatu: A Symphony of Horror Edit

Count Orlok first poses as a nobleman from Transylvania who moves to the (fictional) city of Wisbourg in Germany - he brings death with him as a esult of his vampiric nature. He lives in a ruined castle high in the mountains and local townsfolk refuse to go anywhere near this castle, to the exception of young Thomas Hutter, the assistant of Wisbourg estate agent, who travels to his castle to show properties for sale in Wisbourg.

Orlok conceals himself in one of his soil-filled coffins and is loaded onto a ship bound for Wisbourg. Onboard the shp, he kills every crew memeber untl only the captain and his first mate remain. Later when the first mate goes to the cargo hold to investigate, Count Orlok rises from his coffin, terrifying the first male who jumps overboard in fear. The captain ties himself to the wheel of the ship when Count Orlok creeps up on him and kills him.

Upon his arrival in Wisbourg he speards disease and plague, forcing the local authorities to declare a quarantine and provoking hysteria amongst the citizens.

Orlok stalks and attacks Hutter's beautiful young wife, Ellen, in her room, but during the pleasure of drinking her blood, he is caught unware by the rays of the rising sun. When he hears the crowing of a rooster, he suddenly realized his own flaw and was caught in the sunlight, which burns him away in a cloud of smoke, killing him and ending his reign of horror.

Retrieved from "https://nosferatu.fandom.com/wiki/Count_Orlok?oldid=4318"
Community content is available under CC-BY-SA unless otherwise noted.